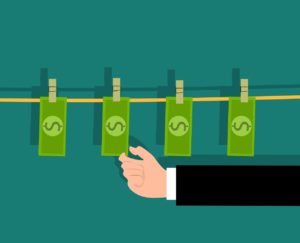 We hear the phrase whenever we are watching a procedural drama on television, or watching a movie about the mob. This phrase immediately engenders images of nefarious characters transacting business in the organized crime underworld. Indeed, recent news indicates that the current occupant of the White House is possibly mired in a scheme involving this very crime. Of course, the crime we’re talking about is Money Laundering. While the phrase “money laundering” is ubiquitous, few people know precisely what type of crime it is meant to describe. In fact, money laundering is not just one type of activity. Rather, it contains many different types of activities focused on one goal. That goal being to conceal the illegal source of money in someone’s possession.

The phrase “money laundering” is descriptive enough to give us an idea of what the crime encompasses. In essence, the perpetrator is trying to “launder” or “clean” money. What about the money needs to be cleaned? The fact that the money is the result of illegal activity, i.e., stained by illegality.  Thus, the person with the tainted money needs to put it through another transaction or entity. That transaction or entity will separate the stained money from the perpetrator. Accordingly, as a result of the transaction, the perpetrator gets money back that is no longer tainted as money from illegal activity.

To use a pop-culture reference, take the television show Breaking Bad. In that show, the main character, former science teacher Walter White, made a great deal of money selling high-quality crystal meth. He eventually purchased a car wash business with all the money he made. Analyzing that into our three-step process above, (i) Walter had lots of money from illegal drug sales; (ii) he engaged in a transaction — purchasing the car wash — to hide the fact that the money was from ill-gotten gains; (iii) the stained money that went into the car wash was “laundered,” so that the money coming out of the car wash (profit made from running the business) was not associated with the initial illegal activity of selling drugs.

To combat money laundering on the federal level, Congress passed the Bank Secrecy Act of 1970. That law requires banks to report any financial transaction that exceeds $10,000. Accordingly, if someone comes into a bank to deposit a large amount of cash, over $10,000, that deposit will trigger a reporting requirement on the part of the bank.

A little less than two decades later, Congress passed the Money Laundering Control Act of 1986, which officially made it a federal crime. The Act consists of two sections; 18 U.S.C. § 1956 and § 1957. Section 1956 makes it a crime for individuals to engage in a financial transaction with proceeds that came from certain specific crimes, so-called “specified unlawful activities” (SUAs). SUAs include drug distribution, murder, fraud, and bribery. Moreover, the law requires that the individual had the intent to disguise the source, ownership, location, or control of the money.

Section 1957, nicknamed the “money spending statute,” makes it illegal to engage in a financial transaction in excess of $10,000, where the money was derived from an SUA. Notably, in contrast to section 1956, there is no intent-to-conceal requirement. Thus, if an individual spends more than $10,000 of ill-gotten gains, regardless of whether the individual wanted to disguise it, then he or she violated section 1957.

Money laundering can be a complicated crime to prove for prosecutors.  Yet oftentimes, a person in possession of an unusual amount of cash will raise a red flag that money laundering is afoot.  Hopefully, the information above gives you a better understanding of the crime.  If you have any questions, do not hesitate to consult an attorney with experience in handling money laundering cases.